So this is the little page where I tell you what’s been happening friend to friend, things I’m excited about and a brief answer to the familiar question busy travelers get all the time, “Where ya been?”

The past few months have been really gratifying. I’ve mostly been woodshedding, as they say, becoming a better musician. And, in the midst of that, I had an opportunity to score a film and see the release of an album I began three years ago.

The film is about the caregivers to the people in a transitional living facility. The project is by a photographer turned filmmaker named Rebecca Truszkowski and it’s a subject dear to both of our hearts. Her grandmother, and my mother (not the same woman), both spent a good part of their lives caring for mentally ill homeless. What’s so beautiful about this film is that so many of the current caregivers had been clients at the facility before dedicating their work life to offering others a hand up. The music is clean acoustic guitar that tries to reflect the beauty of those who work so hard to provide a loving place from which to begin again for people who’ve been through some horribly difficult situations. 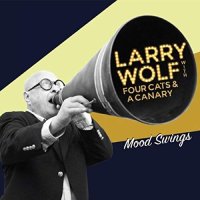 The album is called “Mood Swings” and the artist is Larry Wolf, whom I’ve mentioned a few times on this site. He was one of the circle of actors Robert Downey Sr. used for his movies back when Iron Man was just another dog in the “Pound.” It’s mostly a jazz record, with a little bit of Leadbelly. I produced a much of it, played guitar and harmonica, and contributed some BVs. Because Larry is a good actor, he’s such a good musical storyteller. But, this isn’t an actor’s record, this is a seasoned vocalist, digging into the essence of songs you may have heard hundreds of times…or not. Larry also adds some of his own verses and commentary to evergreen standards. What’s gratifying to me is that the reviews have been so positive, with special mentions for the guitar playing in a group with veterans of Jazz artists I’ve admired for years. And if I can share an intimate thought, I did have a moment listening to the rough mixes where I heard myself and felt like I was playing like I’d like to hear someone playing. That may sound silly (and all self-criticism is still close to the surface!), but it’s a wonderful feeling to step into a world and feel like you can do just what you wanted to do within it.

And if you haven’t heard it on KJAZZ in Los Angeles, the reviews link to it and you can find it here.

Other things to emerge from the shed have been a couple of nice solo jazz guitar gigs and of course the great fun of singing Nilsson at the beginning of the summer.

Autumn is my favorite season, so I’ll have more good stuff to share with you before too long, I hope!

Anyway keep checking this page for more. And while you’re here, drop me a line and let me know what’s you’re up to, okay?