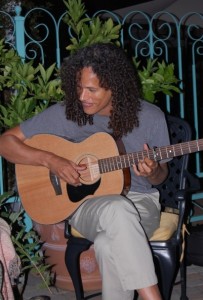 So, about 2 months ago now, I went to a party and fell in mad infatuation.  Yes, with a guitar.  It was couple weeks before the Kerrville Folk Festival and I convinced Jeff Cohen, the president of Voyage-Air Guitar, that I needed to take this instrument there.  I got it the day before I left and by the second day of the festival, infatuation became true love.

I’d been wanting to get an OM bodied guitar for a while now and this thing sounded great!  The tone is sweet and balanced.  So much easier to solo on this than my dreadnought.  OM’s just kind of cut-through a little better I always think. 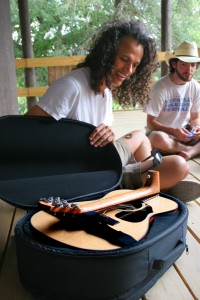 HOWEVER, it’s pretty amazing to have an instrument that you can fold in half, stick on in an overhead bin along with your laptop on an airplane, and you can carry it on in a backpack!

Seriously, you can put this thing on your back and people with think you play accordion!  But you open it up, freak ’em out — it’s kind of like seeing a double jointed person bend an arm backwards when you first see it — then you snap it into place.  It’s ready to play right then!  I mean sometimes you have to do a little fine tuning, but really, I’ve sat down in a circle and started improvising mid-song, inspiring jaw drops in the first couple notes!  By the middle of the fest I was becoming known as the “guy with the switchblade guitar.”  It cracked me up.

Here are some more photos from the festival of people checking it out or just being amazed: [nggallery id=26]

You’ve got to get one of these if you travel or just like to show up and jam without carrying a heavy awkward load.  The cool thing is that your hands won’t hurt from carrying that hard shell case through the airport either….  You can get at a lot of mom and pop stores and the major online retailers, plus the big boxes like Guitar Center and Sam Ash.  (voyageairguitar.com)